Get a Price
Shop Online (0)

Call or Text us too!

Call or Text us too!

Wonder Windows was recently the subject of a Small Business feature story done by Democrat & Chronicle, a local daily newspaper here in the Rochester NY area.  The article gives readers a closer look at the history of the company, which is now proudly celebrating fifty-two years of installing windows in the greater Rochester community. 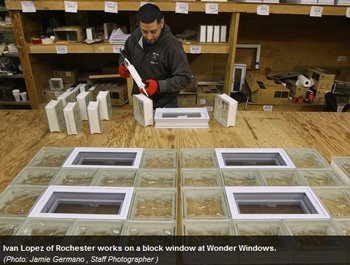 Originally founded in 1962 by Arthur Lazeroff, Wonder Windows initially built its business by serving an extremely wide and diverse service area.  In fact, many of the company's early customers were located far outside the city limits, in rural areas that included Mount Morris, Medina and several others.  When Arthur's son, Mark Lazeroff, took over in the 1990's, one of his primary focuses was to keep things more centralized to Rochester.  This ultimately proved to be a wise decision, as today they are well-known for being a strongly community-driven company.

A View into the Wonder Windows History

The article recalls a number of the changes and evolutions that have taken place over the years.  One of the most notable is the irony of how their location, the Old Mansion News Building, had no windows when they originally moved there in 2002.  Another strong theme is the emphasis that the owners place on family.  Wonder Windows is still family-owned and operated today, and committed to treating all customers equally, regardless of how big or small their needs.

After more than five decades in Rochester, Wonder Windows recently expanded their business area to offer Buffalo NY window installs.  For more information on the Democrat Chronicle article, their recent expansion, or why so many homeowners in Rochester have come to trust them for affordable replacement windows, they can be reached at 585-654-7000.